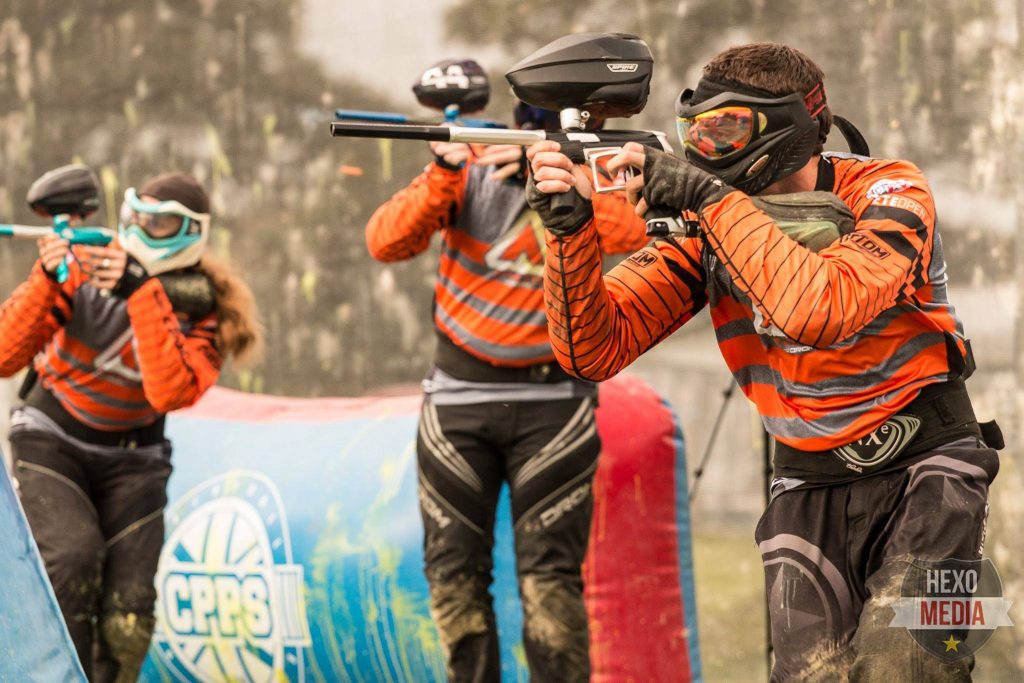 DROM recently sponsored an event in the United Kingdom, CPPS 7 Man, this is where any team from all divisions get to play against the top teams in a semi-casual way but with the added fun of another two players on the field. 14 guys with guns, semi uncapped settings, with unlimited paint, what could be more fun? Well, honestly nothing, especially when you are surrounded by a group of like minded individuals from across Europe all under the banner of the DROM Athlete family.
So let’s meet the guys: Left to right we have: Callum Hayhoe, Jonathan Lee, Matt Davies, George Attwood, Romain Righini, Tim Warner, Rich Thompson, and Guillaume Lebourgeois. 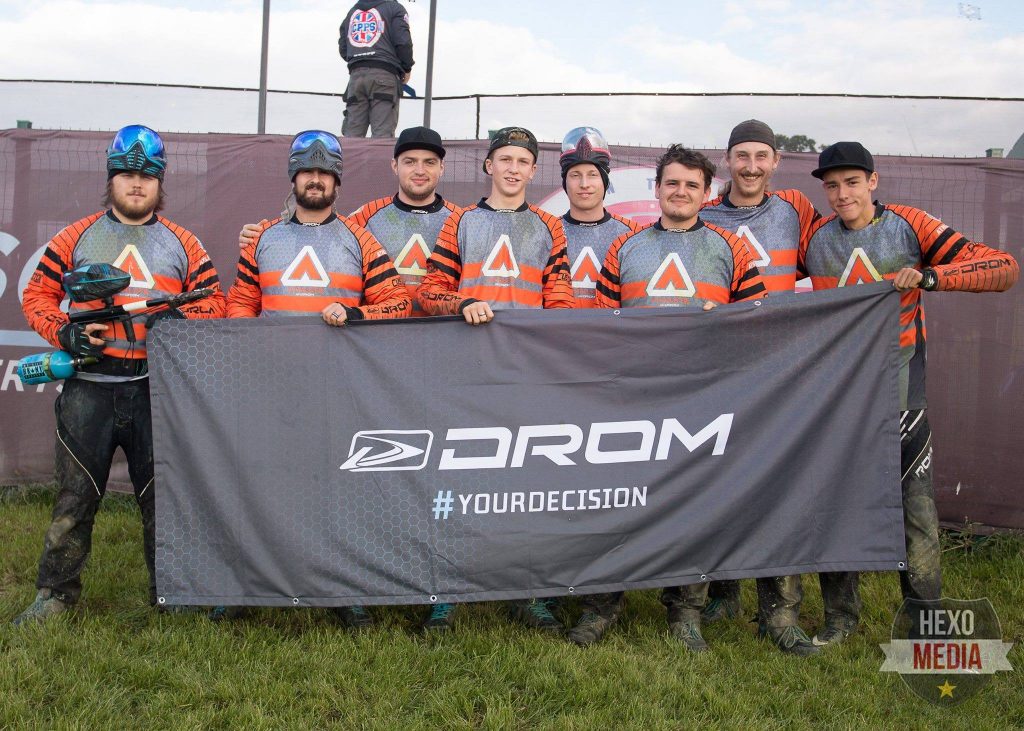 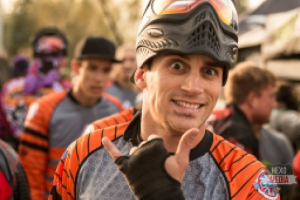 Several people have come up to me and asked “What does it mean to be a DROM Athlete?”, well honestly, it’s a family plain and simple, we all play the same sport that we’ve dedicated ourselves to, and want to share it with everyone we possible can.
We make great sacrifices to play the sport we love, just this event three players flew out to the UK to come play with us, whilst others spent their days and evenings driving everybody around.

So to begin, friday evening, we all meet up at the hotel, except for Anthony (He decided to miss his connecting coach, we can’t all be as special as him), after an evening of settling in, laughs and plenty of jokes we all got to sleep. Turns out guillaume sleeps with his gun, if that isn’t dedication I don’t know what is.

The following morning we headed to the site and got ready to play, now for a set of players to come together for one weekend for the first time and try to instantly gel is almost impossible, it always takes time. In our case, this was also true, but the first hurdle to get past was warming up and getting these guys to smile, turns out none of us are morning people.

So back to the serious part, another problem we faced is calls, with players coming from different teams we all use different names for bunkers, so to help out everyone we decided on the french way of calling bunkers, and then added some new ones in, which everybody seemed confident in understanding.
Saturdays games:
So our first four games didn’t go exactly to plan, we lost all of them due to various reasons, one of the funnier ones in my opinion was the fact we were talking 2 different languages. Turns out calling something in english and getting a response in french and vice versa doesn’t work well.

After we recollected ourselves, our next match saw, Anthony and Rich pushing the field in under 30 seconds, and closing the game out in a matter of moments. 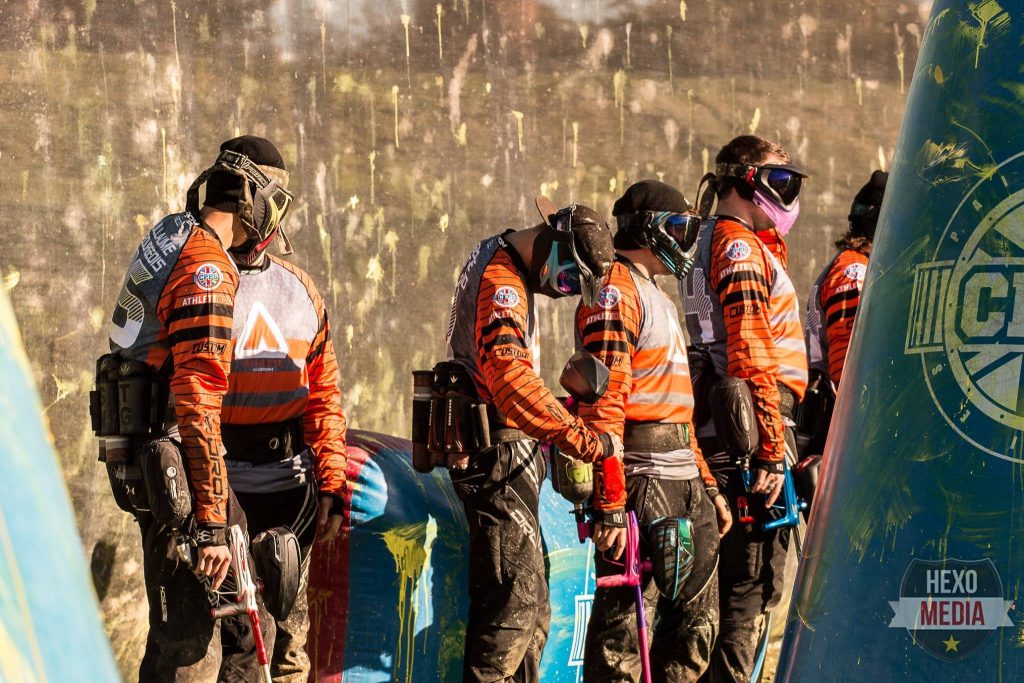 The change in the team we all saw after winning that game was amazing, everybody was upbeat, laughing joking and way more positive. All the doubt had disappeared and been replaced with sheer drive to go out and win the rest of our games, there is nothing better than seeing a family pull together and start performing.

We then finalized our breakout plans, we went into the rest of our games, learning from our mistakes and playing a much faster, aggressive, team focused game we ended up closing out six games in a row with convincing wins, six or seven players alive each time. What a turnaround from the morning.

At the end of saturdays games we finished with 6 Wins 4 Losses, but none of the team saw it that way, we had all reinforced the links between us, and what made us Drom Athletes. The next step try to beat even tougher opponents, in the higher division of CPPS 7 man. It went without saying at the end of the day we all shared this belief – “Being a Drom athlete is not a title given it is a title earned. Be proud, be motivated, be better each time, become the best you can be, be an athlete.” – Rich Thompson #89 #YourDecision #DROM #Athlete

Thanks again to Hexo Media for providing great shots throughout the whole weekend.